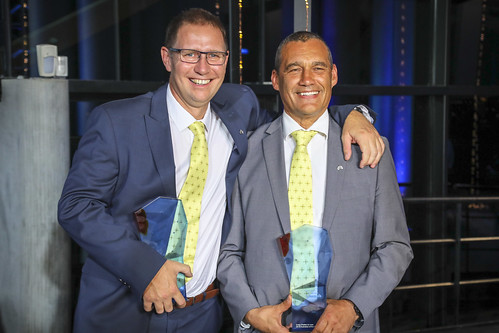 Dr Richard Harris SC OAM from South Australia and Dr Craig Challen SC OAM from Western Australia are the 2019 Australians of the Year for their heroic efforts as part of an international rescue mission to save 12 boys from flooded caves in Thailand.

National RecipientAustralian of the Year2019

In July 2018, anaesthetist Dr Richard Harris and retired vet Dr Craig Challen made worldwide headlines when they joined an international team to rescue a group of boys and their soccer coach from a flooded cave in Chiang Rai, Thailand.

Richard is a diver with 30 years' experience and a specialist in aeromedical retrieval. He has previously participated in complex diving recoveries, appeared in National Geographic documentaries and, in 2015, was recognised for his outstanding contribution to cave exploration. In 2017 he was awarded The Australasian Technical Diver of the Year.

Craig has dived some of Australia's deepest wrecks and has set depth records in diving, including diving to 194m in the Pearse Resurgence, New Zealand in 2011. He was awarded Technical Diver of the Year 2009 at the Australian technical diving conference Oztek.

Both Craig and Richard were awarded the Star of Courage for unwavering and selfless bravery following the successful rescue of the trapped soccer team.