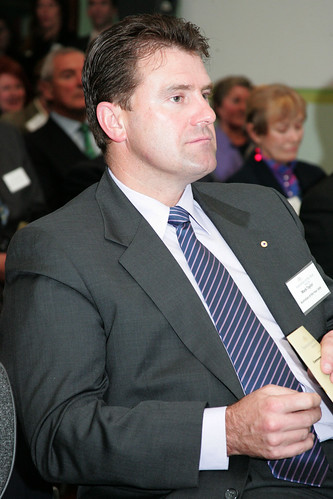 Mark Taylor began playing cricket as a primary school student in the regional town of Wagga. While studying at the University of Sydney, he earned selection in the New South Wales state team in 1985. Taylor debuted for Australia against the West Indies in January 1989, but cemented his place during the subsequent Ashes Tour of England. He scored a remarkable 839 runs in the series, which was second only to Don Bradman’s efforts in 1930. Taylor subsequently played 104 test matches, scoring 7,525 runs and taking 157 catches. He succeeded Allan Border as captain in 1994 and was regarded as an innovative and effective leader. In Pakistan in 1998 Taylor equalled Bradman’s record score of 334 not out, but famously declared Australia’s innings closed at stumps.

Shortly before retiring in 1999 he was named Australian of the Year; he congratulated those Australians who had achieved things for their nation but were not recognised at award ceremonies.